“Now in the further development of science, we want more than just a formula. First we have an observation, then we have numbers that we measure, then we have a law which summarizes all the numbers. But the real glory of science is that we can find a way of thinking such that the law is evident.” -Richard Feynman

“The idea of causality, that it goes from one point to another, and another, and so on, is easy to understand. But the principle of least time is a completely different philosophical principle about the way nature works. Instead of saying it is a causal thing, that when we do one thing, something else happens, and so on, it says this: we set up the situation, and light decides which is the shortest time, or the extreme one, and chooses that path. But what does it do, how does it find out? Does it smell the nearby paths, and check them against each other? The answer is, yes, it does, in a way.”

Feynman liked to picture light as always being a particle, and came up with a way to explain its wavelike behavior based on the particle’s ability to explore all possible paths in spacetime. This is what he meant by his metaphor of light ‘smelling’ its way from a source to a final destination. He thought of a particle of light starting out from its source and exploring all the infinite possible routes to get to a final destination, judging the best route by the way the neighboring routes compare with it in terms of the time they would take. If those neighboring routes take a very different time from the route being considered, that route gets rejected; but if the neighboring routes take about the same time, that route is chosen.

Clearly this is a complicated and sophisticated process! If we think of light as a little particle doing this route comparison for every possible route, we might wonder how light ever manages to get anywhere! 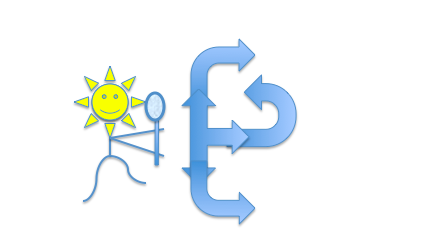 A photon examining and comparing all possible routes with one another.

It turns out that if we just stick to the wave picture, we can see quite readily how the behavior of light emerges naturally. But one might ask, what happened to the particle nature of light? We’ll see that it emerges after the wave has done its exploratory work.

Below is a slightly modified version of Feynman’s picture of a wave of light encountering an opening in a screen (notice that even Feynman, who thought of light as a particle, had to include their wave nature!). Two different possible sizes of the opening are shown; the dashed lines show the initially large opening closing down to just a tiny pinhole. For the wider opening, a lot of the initial wave gets through, and is relatively undisturbed by its passage through the hole, so it continues to propagate in the original direction (shown in blue wavefronts and the blue arrow). Most of the light is received at point A in a straight, ‘ray-like’ path from the source.

However, for the tiny opening, the wave is greatly disturbed by its passage, and spreads out as it exits from the hole (this is called ‘diffraction’). This situation is shown in red. We see this sort of thing all the time with ordinary waves, such as water waves. For this case, the light has a much greater chance of ending up at B or C, which was very unlikely with the wider slit.

In the Transactional Interpretation (TI), all quantum objects such as photons are fundamentally wavelike. They do all their basic ‘exploring’ as waves , and it’s only in the very final stage that a particle-like behavior emerges. In TI, a photon begins life as an ‘offer wave’ (OW for short) emanating from an emitter. But at subtler levels (the relativistic level), it turns out that an OW is only emitted if it also gets responses — ‘confirmation waves’ (CW) from systems, such as atoms, that are eligible to absorb its energy. The interaction between an emitting atom and one or more (usually many) absorbing atoms is a kind of mutual negotiation, and both are necessary to get the process started. Once the process starts, the OW still has to decide which of many responding atoms it will choose for its energy deposit. All of this goes on in the background, beneath or beyond the spacetime theater. It’s akin to actors taking their places before a scene is filmed–only the final filmed scene is the spacetime process. But in this case, many actors are called but in the end only 2 are chosen: the emitter and ‘winning’ absorber. Then the filming proceeds — and that is the actual process that occurs in spacetime. The selection of one absorber and the delivery of a chunk of energy is the point where the discrete, particle-like aspect enters. The delivered chunk of energy is the “particle” or quantum.

All stages except the final choosing of the winning absorber are carried out with the wavelike aspect–this is the De Broglie wave, named after the French physicist Louis de Broglie, who first proposed that not only light, but material particles like electrons have a wavelike aspect as well.

So in the TI picture, we don’t have a photon of light having to examine all possible paths. We just have a wave undergoing natural wavelike interference. It is that interference that becomes part of the negotiation between the emitter and all its potential absorbers. Some potentially absorbing atoms may not respond at all, if the offered wave undergoes completely destructive interference before it reaches them. On the other hand, the wave can constructively interfere and provide a large OW component that elicits a correspondingly large CW response from potential absorbers that it reaches. Feynman’s ‘sum over paths’ boils down to a description of the behavior of the interfering OW. The particle of light–the photon–emerges only at the final stage, when one of the responding absorbers ‘wins’ the contest and absorbs a quantum of electromagnetic energy–a photon.

View all posts by rekastner